The History of Kennett’s Library 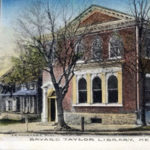 At the suggestion of William F. Wickersham, a meeting was held on the evening of Dec. 9, 1893 to consider the possibility of establishing a free public library in Kennett Square. Several meetings followed, and by Feb. 10, 1894, a Board of Trustees consisting of nine members was elected. They applied for a charter, which was granted on Jan. 30, 1895. Thereafter, a lot was purchased from the local bank on the corner of South Broad Street and Apple Alley, and a building erected at a cost of $6,791.50.

The library was dedicated on Sept. 24, 1896, named in honor of Bayard Taylor, and opened to the public on Sept. 28 with a few periodicals and empty shelves. During the day several volumes were received as gifts, and on the following day the contents of the Kennett Square Union Library Company (a circulating library that at the time had no permanent facility) were received.

The first librarian was Miss Alice W. Swayne, daughter of the sculptor, William Marshall Swayne. She was assisted by her sister Ella and Miss Mary S. Allen, who accessioned, classified, and cataloged new books. The first applications for reader’s cards were registered Oct. 13, and by the following September, the total number issued was 587. On Sept. 30, 1897, according to the first annual report of the librarian, 7,326 books had circulated during the previous year. The library was open from 9 a.m. to 9 p.m., Monday through Saturday during the first 20 years of service. Miss Swayne worked these hours with only one hour off for lunch and dinner. Such ten-hour days were difficult, especially since she did not always have assistance. When she retired in 1918, the library was firmly established in the community.

Miss Florence N. Cleaver replaced Miss Swayne as director. She stayed on until 1930, when her assistant, Letha M. Entrekin, took over for one year. In 1931, Miss Anna C. Janke became librarian and worked with few resources during the Depression years. When failing health forced her to retire, Roberta C. Cole (Ficcio) became director in 1939. Mrs. Ficcio retired in 1969, having served the library longer than any other employee. She will be especially remembered for her work with children and local history. Margaret Voorhees Leach became the next director and stayed until her retirement in 1976. At that time, Joseph A. Lordi became director, and stayed until 2005, when Donna Murray became the new library director.

About 1960, the surrounding municipalities agreed to participate in the support of the library, and it was felt that the time had come to construct a new building that would more adequately serve the needs of the residents of southeastern Chester County. There was much discussion, but finally, a new building was erected on the site of the old State Street Meeting House. The new library was dedicated on Feb. 15, 1962. The new facility was a success from the beginning, as circulation and patron visits doubled within the year. Of course, the expenses doubled – from $12,878 to $25,580 per year!

During the early 1970s there was discussion about installing a new Children’s Library in the basement of the library, but this dream did not materialize until the spring of 1979, when the new Children’s and Young Adult Library was dedicated. In 1983 the library began its first Annual Giving campaign, whose purpose was to raise non-tax funds to operate the library. These Annual Giving campaigns have continued, raising more than $10,000 per year. Since 1990, the library has held additional fund-raising activities, such as the annual Home and Garden Tour, Gift Box and book signings. These special events have been very popular, and help raise at least $15,000 per year.

In March of 1995, the library entered the computer age when we circulated our first book on our new integrated automated online computer system. The process had begun four years earlier with the retrospective conversion of library materials into computer-readable form. This was followed by the introduction of the Patron Access Catalog, a computerized catalog system, which took the place of the old card catalog. Our new system was fully paid for by a grant from The Longwood Foundation.

By Joseph A. Lordi

Friends of the Kennett Library